Diesel cheaper than Petrol for first time in 15 years

The price of diesel fuel has fallen below petrol for the first time since 2001 as supermarkets start to pass on wholesale savings to consumers.

Morrisons, Sainsbury's, Tesco and Asda have all initiated price cuts, with Mark Todd, petrol director for Morrisons, commenting: "This is a milestone in motoring and many younger drivers won't remember the last time that diesel prices were lower than unleaded."

In fact, most drivers will probably struggle to remember, as 15 years ago a litre of either fuel would have cost just 77p, significantly lower than it is today which puts the relatively rapid increase in the cost of motoring into perspective.

It also shows how compelling diesel vehicles still are for cost conscious motorists., despite recent environmental concerns about the impact diesel fuel emissions are having on urban communities around the world.

An interesting development and one which certainly makes the cost-per-mile argument for diesel even more attractive.  It remains to be seen whether government legislation to combat these emissions concerns will start to negate any benefit diesel fuel prices are currently delivering.


It's official - Honda is a Guinness World Records Holder! 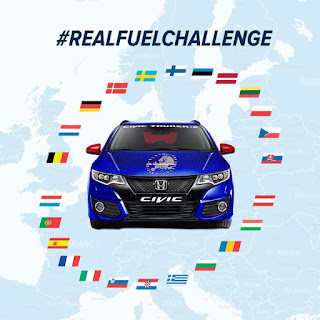 Drivers Fergal McGrath and Julian Warren were understandably delighted with the result, and Fuel Watchdog joins in congratulating the pair and Honda on their achievement, which helps sets the benchmark yet higher and provides a continued focus on fuel economy in cars - which of course we love!

More information about the challenge can be found by clicking here